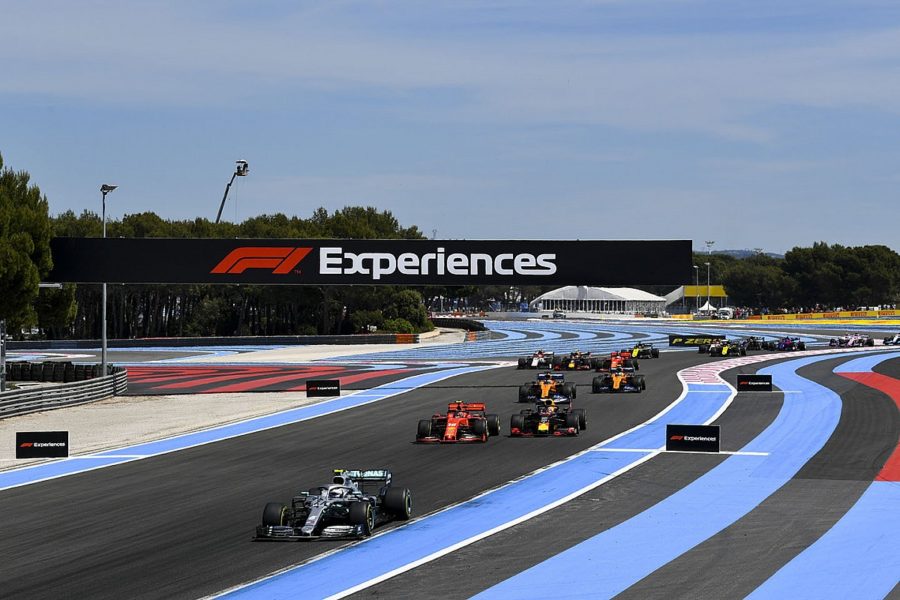 Verstappen ice cool as Leclerc crashes out!
France is home to the city of fine dining and its capital, Paris! Now halfway through the 2022 Formula 1 Season we arrive just off the coast in France, Le Castellet holds the Circuit Paul Ricard spanning 5.8 km in length, and can have 167 different configurations with 53 Laps for the drivers on race day!

Heading into the Race Weekend a hot weekend with temperatures reaching the 30s whilst track temperatures hit up to 55 – 60 degrees. During qualifying this Saturday, we watched as the drivers faced the heat and above-average tyre degradation. During Q1 we saw Alex Albons Williams spin out whilst Daniel Ricciardo and Mick Schumacher got deleted lap times in the last minutes of the first qualifying period (Q1). Following Q1 we saw Pierre Gasly, Lance Stroll, Zhou Guanyu, Mick Schumacher, and Nicholas Latifi out of qualifying.

A few minutes later we began Q2 with only 15 drivers remaining it was a tense last few minutes in Q2 as the Australian Honey Badger fought for his position in Q3 taking 9th until the Haas of Kevin Magnussen has a faster time by just 0.0081 seconds pushing him into 11th putting him out of Qualifying. By the end of Q2, we saw Daniel Ricciardo, Esteban Ocon, Valtteri Bottas, Sebastian Vettel and Alex Albon out of Qualifying.

Finally, Q3 began we saw all the cars leave in a daisy chain out of their garage onto the track. The Ferrari’s of Charles Leclerc #16 and Carlos Sainz #55 had pace and strategy as Sainz would go for a flying lap he would give his teammate Leclerc a tow by breaking the air and giving him a few extra seconds taken away from his lap time. Q3 Wrapped up with Charles Leclerc taking pole position, Max Verstappen in 2nd and Sergio Perez in 3rd whilst Lewis Hamilton took 4th, Lando Norris in 5th, George Russell in 6th, Fernando Alonso in 7th, Yuki Tsunoda in 8th, Carlos Sainz in 9th and Kevin Magnussen in 10th.

Following an Engine replacement for Sainz, he will start 19th whilst Kevin Magnussen will start 20th following Power Unit Changes, moving Daniel Ricciardo to 9th and Esteban Ocon to 10th on the grid following Race Day.

“It’s lights out and away we go”

Leclerc had a terrific start keeping his pole position throughout the beginning until turn 9 when Esteban Ocon collided with Yuki Tsunoda’s Alpha Tauri knocking him to the back of the race. Into Lap 6 we saw Verstappen start an incredible fight between Leclerc and himself for 1st. into Lap 18 we watched as Charles Leclerc’s Ferrari went spinning into the barriers which made Leclerc retire for the 3rd time this season and brought out the safety car causing most cars on track to go into the pits and also giving Max Verstappen the lead with Yuki Tsunoda Retiring the Alpha Tauri.

In lap 33 Latifi ran Haas Driver Kevin Magnussen off the track causing him to retire. During Lap 41, Sainz and Perez had a thrilling battle until the end of the lap until the team for Sainz Radio, “Box, Box” received “not now, not now, not now” back from Sainz. Until lap 43 when Sainz finally came into the pit to push him back to 9th with Williams retiring Nicholas Latifi’s car into the pits. Lap 49 brought a Yellow Flag for Sectors 1 & 2 which then turned into a Virtual Safety Car with Zhou Guanyu having “a Technical Issue”.

As usual, the champagne was sprayed around the podium with Max Verstappen taking 1st, Lewis Hamilton in 2nd, and George Russell in 3rd Followed by Sergio Perez in 4th, and Carlos Sainz in 5th. Alonso took 6th, Norris in 7th, Ocon with 8th, The Australian Honey Badger in 9th, and Lance Stroll in 10th. Following Stroll, we saw Vettel in 11th, Gasly 12th, Albon 13th, Bottas 14th, and Schumacher in 15th. The bottom 5 saw Guanyu with a DNF from a +6 Lap difference, with Latifi, Magnussen, Leclerc, and Tsunoda also receiving DNFs.

After the result of the day, Max Verstappen extended his lead on Leclerc in the Drivers’ Championship by 64 points.