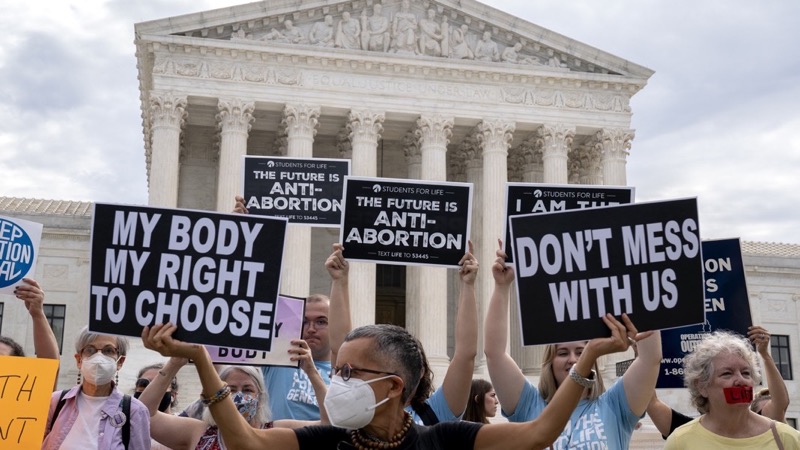 Pro-choice activists hold signs outside the U.S. Supreme Court in Washington, D.C., U.S., on Monday, Oct. 4, 2021. The court's conservative wing to offers a menu of opportunities exploit its 6-3 majority, and give Republicans the type of payoff they envisioned when they pushed through her Senate confirmation just before the 2020 election. Photographer: Stefani Reynolds/Bloomberg

Roe v Wade
In 1973, the Supreme Court of the United States of America endorsed the right to an abortion as a constitutional right through a landmark case entitled ‘Roe v Wade’. This legislation responded to a Texas statute that implied abortion could only occur in life-threatening situations for women, ensuring that abortion was accessible to all American women. In June 2022, America revoked this ruling after 50 years of precedent, becoming one of four countries to do so in the past 25 years.

The overturning of ‘Roe v Wade’ was a decision made by the US Supreme Court, made up of nine justices who are the final arbiters for federal laws. The initial ‘Roe vs Wade’ ruling ensured that states could not ban abortion within the first trimester of pregnancy. The nine justices argued whether this judgement was still constitutional. When deliberating on the fate of ‘Roe v Wade’, the justices had differing opinions. Justice Samuel Alito was avidly anti-abortion, calling current reproductive laws “egregiously wrong,” and amounting to “an abuse of judicial authority.” Opposingly, Justice Stephen Breyer argued that “from the very moment of fertilization, a woman has no rights to speak of. A state can force her to bring a pregnancy to term even at the steepest personal and familial costs.” Ultimately, the decision was made to overturn ‘Roe v Wade’ with a six-justice majority.

The reversal of ‘Roe v Wade’ has resulted in each US state now being responsible for setting its own reproductive laws. Eight states immediately banned abortion through ‘trigger bans’, which were designed to create immediate state action if ‘Roe v Wade’ no longer applied. Alabama, Arkansas, Mississippi, and Missouri have the strictest bans, with no legal exceptions for an abortion to occur.  It is predicted that a further five states with trigger bans in place will soon follow suit, and potentially 26 states in total will ban abortion entirely in coming months. Abortion is most likely to remain legally protected in 20 US states including California, and New York, and Washington.

One month after the overturning, there have been demonstrable consequences and forecasted effects on American citizens. Last year, it was reported that one in every four American women received an abortion in their lifetime. Now people who wish to seek an abortion will have to travel to neighbouring states, which has been evident in Texas abortion clinics. These clinics saw a half-dozen fewer visitors than usual, but due to those travelling to receive treatment in other states, only a 10% nationwide drop in abortions has been identified. It is predicted that the people who will be most affected by the reversal of this law are impoverished women and black women. Jason Lindo, professor of economics at Texas A&M states “Young women and women of colour will be disproportionally affected by negative impacts on educational attainment and early career investments, which will exacerbate racial and ethnic inequalities”. As a result of the controversial nature of the ban, various protests and riots have sprouted, particularly in Washington DC, the home of the US Supreme Court.

Current US President Joe Biden has used the ban on this constitutional right to encourage people to vote, stating “This is a sad day for the country in my view, but it doesn’t mean the fight is over.” Former Republican President Donald Trump has made opposing remarks, stating “This is following the Constitution, and giving rights back when they should have been given long ago … This brings everything back to the states where it has always belonged.”

No matter if ‘Roe v Wade’ remains overturned or is reinstated, there will undoubtedly be mixed public opinions on the matter, often based on religious or cultural beliefs. In Australia, abortion remains legal and fully decriminalised in all jurisdictions, along with around 75 other countries around the world. It is important that Australia as a society observes the outcomes of the United States’ current situation and assesses the collective morals of our own society accordingly.