For centuries, water has been thought of as a substance mainly exclusive to Earth in a dry and barren solar system. Yet, in recent years, scientists have made ground-breaking discoveries on the diversity of our cosmic backyard. Let’s test your knowledge…

What is Earth’s ranking in amount of water on a planetary body in our solar system?

If you guessed D, you are correct. There are four astronomical objects that hold more water than Earth! Your eyes may have already skipped down to the infographic below, but earth holds an estimated 1.335 ZL of water (the unit ZL being 1 billion cubic kilometres) of water, behind Saturn’s mood Titan, and Pluto’s moons Europa, Callisto and Ganymede, who comes in first with a 35.4 ZL of water and 46% water content, much greater than Earth’s 0.12%. 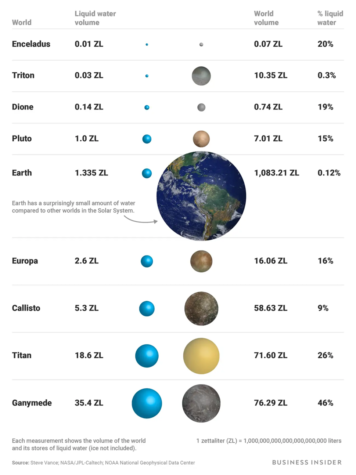 Water in our solar system is surprisingly abundant, appearing mostly in the form of brines; these are salty bodies of water, similar to Earth’s oceans. These brines are particularly intriguing to scientists, as expressed by Rivera-Valentín, “When we find life … it’s likely going to be associated with a brine.”

The salty concentration in brines raises their freezing temperature, allowing the bodies of water to remain unfrozen at cooler temperatures as we move further away from our sun. Yet there is a delicate balance that must be held within this salt concentration, and a major goal within the scientific community exploring our solar system is to identify the ideal conditions under which brines could sustain life.

Earth certainly isn’t the only ocean world in our solar system, with water existing in diverse forms including ice, oceans, and water vapour in the atmosphere, on a diverse range of moons, dwarf planets and comets. Let’s explore more …
Mars
According to NASA, “Mars was once much more Earth-like, with a thick atmosphere, abundant water”, yet billions of years ago its magnetic field eroded, exposing it to the effects of solar wind (clouds of charged particles moving through space). Approximately, only 13% of Mars’ original water content remains on the planet, with its remanence seen via eroded riverbeds.
Ceres 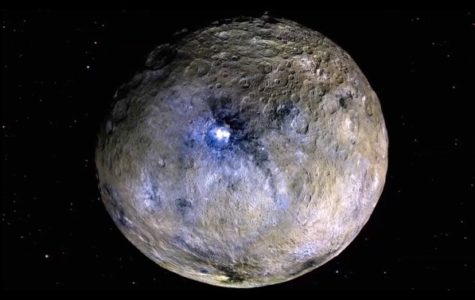 Located between Mars and Jupiter’s orbit, and the smallest dwarf planet in our solar system, Ceres has recently been identified as an oceanic world. Scientist Castillo-Rogez explains, “Long believed to be a primitive body, Ceres is now an ocean world with deep brines at a regional and potentially global scale”.

Known for its mysterious glow, NASA’s data suggests the dwarf planet has water in liquid state underneath its surface.
Jupiter’s moons: 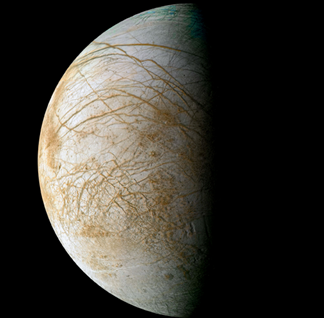 Ganymede – being the largest moon in our solar system, and the only moon to have its own magnetic field, Ganymede has approximately 46% water content. This is predicted to be held in its underground saltwater oceans and could have several layers of ice and liquid water sandwiched between its core and crust.

Europa (seen in figure 2) – Tidal heating from its parent planet allows the saltwater oceans beneath the crust to remain in a liquid form. This tidal heating may also create partially melted pockets of brine on the moon’s surface, becoming increasingly exciting after Hubble spotted “possible water plumes erupting off the moon’s surface”. 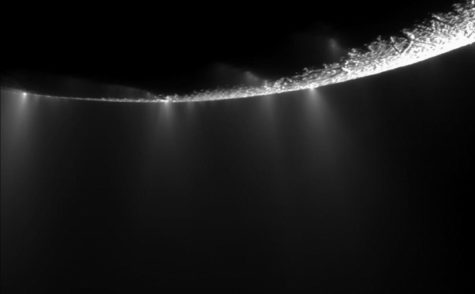 Enceladus (seen in figure 3): This moon’s underground ocean is around 30-40km thick, beginning 10km below the surface. What is most impressive, is that scientists predict this ocean feeds its jets, as seen in the picture, that erupt from the moon’s surface.
Titan: Titan’s underground ocean is believed to be extremely salty – with a similar concentration to that of Earth’s dead sea. It is estimated to begin 50km below the moon’s surface, yet it is unknown whether the ocean is thin, or extends all the way down to its rocky interior.