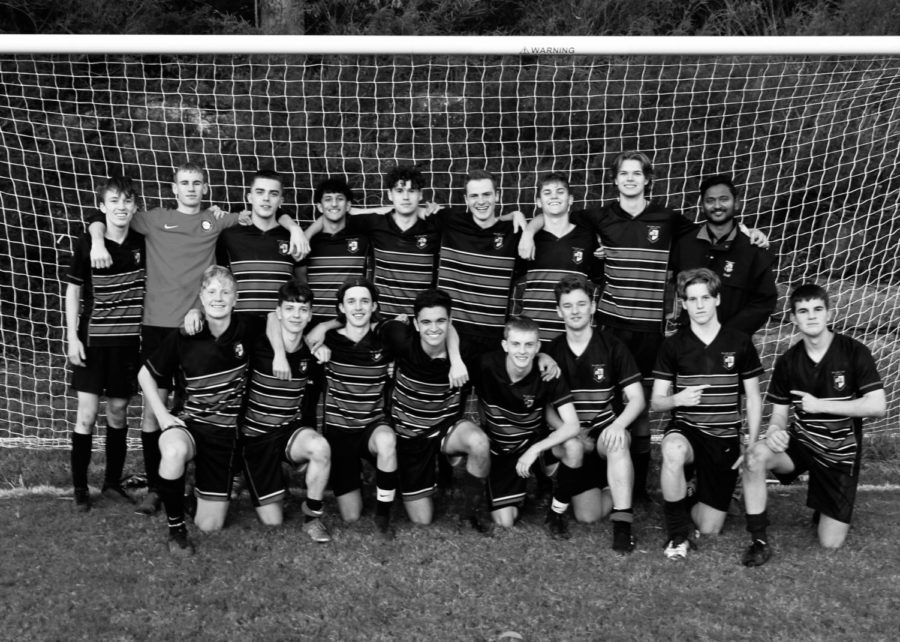 It was a cold, brisk and early Wednesday morning. Freezing, actually. But despite the fact that none of us could feel our toes, this group of young lads could certainly feel something special between them. This was more than a year 7 school soccer trial; this was the beginning of many strong, long-lasting, and cherished friendships, formed on the basis of one thing – our collective love for the beautiful game of football.

Wednesday the 8th of June, 6:15pm. Valentine Sports Park. I’m sure you had all heard these details announced at assembly a couple of weeks back, along with that epic hype video created by Mr. Sen. The Golden Generation was more than hyped for this match. Intense anticipation was flowing through the veins of every player, with the match consuming the mind, heart, and soul for the entirety of the Wednesday.

This semi-final was against Central Coast Sports College – a sports-dedicated school that had won their last fixture 3-2 against Mamre Anglican. Our lads were coming off the back of a lovely 3-0 win, up in Newcastle, but the two-day turnaround meant that celebrations were cut short, as the semi-final was only around the corner. To WCC’s misfortune, this quick turnaround involved the absence of several key players – 4, to be precise, ruled out due to severe sicknesses and injuries. As well as this setback, most of the squad were coming back from sicknesses themselves, also recovering from the match two days beforehand, but they did whatever they could to make themselves right for this monumental occasion.

Despite the odds being against them, the flame of belief in this squad never dies out. This belief was driven and empowered by the many WCC students and teachers who gave up their Wednesday night to support the team, giving Mr. Sen’s men more strength than ever before, and creating an incredible atmosphere at Valentine Sports Park. This was it. The trophy that the boys had been talking about for so many years was in their sights.

Every player was ready to leave absolutely everything on the pitch, and with that, the whistle blew to commence the match.

William Clarke began the match with all guns blazing, putting on immense initial pressure as they have in their previous fixtures. However, Central Coast, unlike the previous teams WCC had faced, dealt with this pressure quite well, and kept their composure whilst building momentum in the early minutes. About ten minutes into the match, a well-placed long ball was met by a Central Coast striker who chipped the ball into the back of the net.

It almost didn’t feel real. This was the first time we had gone down in the tournament, and we had certainly been caught off guard. And this shock would be replicated again mere minutes later when a deflection fell into the feet of an opposition attacker who placed the ball in.

Things certainly were not looking good for Mr. Sen’s men. But despite this early setback, the WCC crowd did not hold back their unconditional support for the team, which sparked the squad’s desire to dig deep and fight for a comeback. After a headered-out corner, Josh skillfully delivered the ball back into the box, finding Luka, who nudged the ball past the keeper whilst being taken out by him. The moment played in slow motion, and the ball hit the post and bobbled across the goal. Thankfully, the referee blew his whistle and pointed toward the penalty spot, awarding WCC a penalty, and a chance to get back into the game. The WCC captain grabbed the ball and headed straight for the spot, placing it down and preparing himself to seize the moment. With ice-cold composure, he slotted the ball neatly into the bottom corner, once again sparking the flame of belief for the Golden Generation.

Our boys knew this match was not over yet, but unfortunately, Central Coast realised that as well and continued to play ferocious attacking football and enforce immense pressure on the WCC defense. Yet another deflection found the Central Coast striker just minutes before half-time, and he capitalised on this chance to increase their lead.

The half-time whistle is blown. Our boys enter the changerooms with a scoreline to chase, but anyone who reads the articles about this squad knows that they never give up.

After a barely audible half-time talk due to the excessive coughing of WCC players, our boys knew how much was at stake in this second half. Striding out of the change rooms, they were welcomed by a human tunnel formed by WCC students – another powerful act of support that provided the boys with great strength. And strong is exactly how they started the second half, except this time with a little more structure than the first. We were finally on the front foot, and Central Coast had a lot more on their plate to deal with. WCC’s increasing momentum earnt them a slightly wide free-kick early on in the half, and Luka once again stepped up to take the set-piece. The positioning of this free kick was set up for a cross, but the captain had other ideas. Bending it like Beckham, he whipped the ball back post into the top corner, bringing the team one step closer to making it even.

The flame of belief was now a fire, and at an all-time high for Mr. Sen’s men. Goalkeeper Joel was in his usual element, stopping shots like a bulletproof vest, complimented by the supreme defensive acumen of centre-backs Luke and Josh. Ethan and Eren displayed similar prowess in the fullback positions but frequently joined in the attack as well, linking up with wingers Hugh C who got in behind with rapid speed, and Aaron, who bamboozled defenders with his tekkerz, as usual. Keeping things under control in midfield with ice-cold composure was Zach, joined by Jazz who displayed both attacking and defensive dominance. Hugh G and Jackson made instant impacts off the bench, fuelling the fire of WCC’s constant attack. Marauding runs from Liam and offensive creativity from Luka continued to put Central Coast on the back foot, pushing them further and further as the game went on.

But the minutes kept ticking.

After 90 minutes of end-to-end finals football, the referee blew his whistle, and the game was over. Intense emotion consumed the hearts of WCC players, coaches, and supporters. Their dreams of winning the CIS Cup had come to an end.

Now, this definitely was a heartbreaking ending to a stellar run in the tournament. But every single player should be more than proud of not only their performance in that match but throughout the entire tournament. Central Coast actually went on to win the CIS Cup, defeating Knox 3-0 in the final, perhaps crediting us as the unofficial runners-up. Nonetheless, out of 60 teams, we had made the top 4 in the state – the furthest the college has reached in over a decade, and an achievement that should leave us with our heads held high. However, as cliché as this sounds, the love and memories within this team are far more valuable than any silverware we could have won. This experience was undoubtedly monumental, but it meant so much more. This match didn’t just mark the end of our run in the CIS Cup.

After six glorious years together, the Golden Generation had played their last match.

“Ladies and gentlemen, I present to you the Golden Generation of William Clarke College football…”

These fateful words were spoken by Mr. Sen at the 2019 secondary sports awards assembly, but he was not talking about the same squad I have been endlessly glorifying. He had awarded this title to the class of 2019. This was a moment that outraged the now-class of 2022, and from this moment onwards, we vowed to prove ourselves as the true Golden Generation of WCC football. We won title after title. Undefeated futsal champions. Undefeated HZSA champions. Open boys futsal champions, and, although not a title, top 4 in the CIS Cup is quite the impressive feat. During our futsal season in 2019, we even beat the “golden generation” several times in training! By the last dance in year 12, Mr. Sen had no choice but to take back his words, and rightfully title our team, the real Golden Generation.

But throughout this endeavour for Mr. Sen’s praise, this team had achieved so much more than shiny medals and league titles. Starting all the way from year 7, this group of boys has created such a special and strong bond, and for our FIFA lovers out there, a chemistry level that would exceed the 100 mark. Personally, I don’t think I will ever enjoy the beautiful game of football in the same way I did with this group. I know for a fact that wherever I play this sport for the rest of my life, I will play with school football strong in my heart. Being on the pitch, by their side, gave me such pure freedom and joy in every match from year 7 to 12, and even little moments on the team bus with them would just make my day.

On and off the pitch, we were brothers – and we always will be.