Urinetown Exclusive: Behind the Scenes 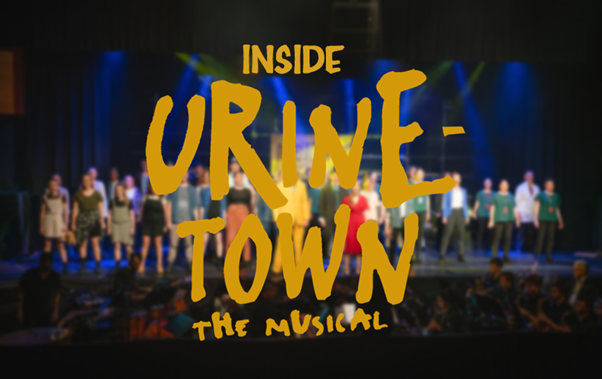 What a show! After being able to see the WCC performance of Urinetown twice, I can definitely conclude it was way better than the expectations the title gave me. With many of my friends and peers in my cohort participating in this masterpiece, I was able to catch a glimpse of how much effort the team put in. Yet, the musical still had me wondering many questions, which I’m sure I share with others around me: what would make a private Christian school like ours so keen to perform a musical with such a ‘terrible title’? How was it that such an obscure concept of a play was really able to captivate and entertain the whole audience?

I began my investigation into WCC’s performance Urinetown at the very top, with Sophia W (Year 12) interviewing Mr Trenerry and Mr Morrison, the theatrical and musical directors. According to Mr Trenerry, their conversation for Urinetown “…started sort of probably around this time last year – sort of end of Term 2 2021.” Although Mr Trenerry had heard of the musical prior to this experience, having himself played the trombone in the orchestra for the local community musical in Year 12, Mr Morrison had never heard of it before. He recalled his initial confusion and shock at the title of the play!

When asked what drew them to the musical, Mr Trenerry said, “I guess we kind of knew that it would take a bit of convincing for some people, but we thought the story of the show, the music, the ability to cause the audience to think and reflect, as well as to entertain them… yeah, we couldn’t go past that!” What seemed to particularly draw Mr Trenerry and Mr Morrison in, however, was the flexibility of the show… “It’s a show with lots of roles – because there’s 6 equal lead roles…and then you have a lot of roles where people have half a song, or a bit of dialogue, and so we thought it was a nice cast show, with the biggest involvement… we had at least a third of the students on stage half the time… which [gave the show] a nice feel… and the rehearsals!”

As a result, after both listening deeply to its extravagant music, and very carefully putting together a draft schedule for the term ahead after a ‘few’ intense games of Super Smash Brothers and Mario Kart, they were both super excited to get into developing a performance of Urinetown – beginning with auditions.

Initially, the auditions seemed to be quite challenging for Mr Trenerry and Mr Morrison, knowing that it is “almost 50% of your job [as director] to get the casting right, as everything unfolds from there.” Although first auditions ran smoother than expected, occurring in an online format of video submissions, the callbacks were a lot trickier. COVID restrictions meant that the singing aspects had to occur in other rooms via Teams. Afterwards, Mr Trenerry was delighted with the great amount of feedback he received regarding the casting, being told all the actors naturally fit their characters.

When asked about their favourite numbers in the show, both Mr Trenerry and Mr Morrison laughed at how it changed throughout the course of developing the show. Mr Trenerry settled on the “Act 1 Finale” as his favourite: “For me, it felt like a bit of a triumph, in terms of the way that the number was shaped and the way that number does many things.” He obsessed over the multiple layers of effort the performance gave, ranging from the multiple singing parts building to the climax of the song, and the humorous effect it had on the audience, commenting on how “…you [could] hear the audience moving through the scene…it was a competition between Connor, Mia and Arielle pulling the most amazing faces!”

Although Mr Morrison couldn’t really choose a favourite, he commented on how much he loved the musicality of “Run Freedom Run.” They had forewarned the cast during rehearsals that this song was the “show-stopper” – it had to be amazing. He even laughed that, in the end when it received spectacular responses from the audience, he’d actually had audience members asking if the vocals had been pre-recorded!

Yet, reflecting on the show as a whole, both directors joyously talked about how it was so much better than they had expected or hoped for. They noted that they really relied on the casting, having little idea of how it would turn out after working in such a short time frame. As they concluded, Mr Trenerry and Mr Morrison emphasised how proud they were of all the members involved in the musical and the enormous effort that they put it. They gave encouraging words of how exciting it was that so many Year 8s and 9s participated. He said they went from “…not knowing what a musical actually is and not knowing what they were doing, to actually contributing to the piece in amazing ways…” Mr Morrison also gave a shoutout to students in the older grades, like Jazz D, who “…just decided ‘Hey, it’s my last year of school – I’m going to do this,’ – and he was great, and he started singing lessons, and just threw himself in!”

With this, they really encouraged Sophia to go and talk to the cast members about what it was like to just be part of the musical, “…the comradery and friendships you build on the set, the skills you learn, the reward of performance…” to gain a deeper understanding of Urinetown.

Taking on some of Mr Trenerry and Mr Morrison’s advice, Sophia and I thought it would be smart to also interview a couple of the actors, first asking Rosalie B (Year 12) on her experience as both an actress and a choreographer for the musical.

When asked about her biggest challenge with choreographing, she exclaimed how, although she’d done choreographing for small groups, the large cast of Urinetown was a massive step up. However, this great number did bring its benefits; “some moments, such as the use of torches in Cop Song, would not have been as effective with a smaller group of people.”

Although her favourite number to choreograph seemed to be Snuff that Girl due to the major dance component and involvement of more technical moves, her overall favourite number was “We’re Not Sorry,” … “as it was so much fun…!”

Finally, I got round to asking some of the lead actors in the musical about their experience, firstly talking to the narrators of the show, Josiah L as Officer Lockstock and Olivia S as Little Sally, (Year 12), to get a perspective on this unique role in a musical. Both mentioned how their role involved a lot of experimenting, with Josiah commenting on his initial task of determining the physical traits of Lockstock, “….like how he stood, walked and talked – and laughed ha…ha…ha…” Olivia felt that, despite the strangeness of the role, she immediately connected with Little Sally, … “She is playful and has some very amusing lines throughout the musical – I especially love the dynamic she has with Officer Lockstock!”

The two romantic leads of the play, Bobby Strong and Hope Cladwell, played by Sam W (Year 12) and Audrey A (Year 10) were also successfully portrayed, having exaggerated, sophisticated personalities. Audrey noted how, like Olivia, she was able to connect with her character quite well, due to Hope’s happy nature. When Sam was asked about the biggest challenge he had taking on the role, he noted how complicated it was to demonstrate the versatility of his character’s personality. He noted, “…my character would interact with my enemy Cladwell differently to his love interest, Hope,” requiring much strength and stamina to maintain these two sides. Both had different favourite numbers, with Audrey exclaiming her enjoyment of the singing duet “Follow Your Heart,” and Sam falling for the classic favourite “Cop Song” with Josiah L and Connor M’s (Year 12) “comedic duo and silly presence.”

Finally, I was able to ask Stephanie M (Year 12), renowned for her remarkable singing skills, about her role as Penelope Pennywise. She had numerous favourite numbers, including “Privilege to Pee” and “Why did I Listen to That Man.” She said, “I loved learning ‘Privilege to Pee’ because of the power I felt from my character… and I loved the journey in learning the song, as I didn’t know I could hit half of those notes before the musical. ‘Why Did I Listen to That Man’ was also one of my favourites, as I loved that this song incorporated so many of the lead characters and layered so many vocal parts on top of each other.”

So, once you got passed the ‘interesting’ title, this outrageous satire left the audience in raptures, wanting more! The stunning ensemble cast electrified the stage, nailing every moment of the play. Both the cast and directors’ time dedication, and talents were obvious, proving that even a ‘terrible title’ doesn’t stop a great show.